Checkout
Meat and wine, the secrets of combining

In many famous works of Rabelais "Gargantua and Pantagruel" much attention was paid to the ability of the wine to unlock the potential of meat dishes and enrich it thanks to a good tandem. “Drink always and You shall never die!” – often said the heroes of Rabelais and really, wine is not only perfectly complements meat dishes, but also can reduce the risks of diseases of the stomach and intestines, thoroughly clean the blood vessels. 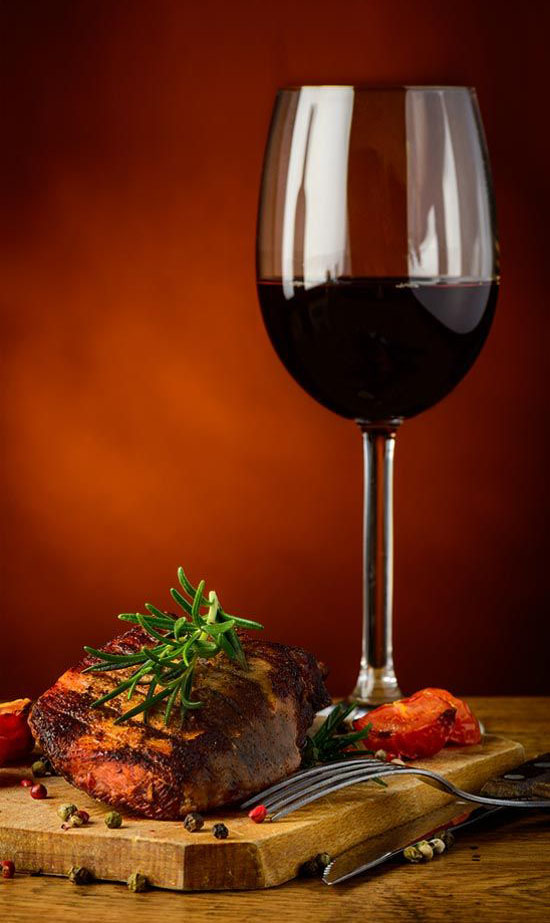 the subtleties of the combination of meat and wine

How to combine wine and meat? Is advice from the real experts in the field of gastronomy: if the wine is not a burst and does not change the taste of meat dishes, you picked the perfect combination for your table. In the world there is a win-win combination meat dishes (and more!) and wine: if possible, it is best to combine meat and wine from the same region. No wonder the traditional combination of white wine with fish and red wine with meat firmly entrenched in the culture of selecting the right pair of gastronomy to wine. Indeed, in those districts where historically ponds were usually well-matured white grape varieties and, therefore, makes an excellent white wine. It is the mineral and chalky soil near water are ideal for fresh, acidic white wines. And of course, these wines are served with fish directly from these water bodies.

In areas where the steppe, mountains and meadows, which were engaged in breeding cattle, as a rule, the soil fat, saturated. Such soils give tannin, potential and rich red wines. And served, of course, meat! That is why, if You have on the table the steak originally from the US, it would be best for him to file a California Cabernet Sauvignon. But if you don't live in California – no problem! You can follow the taste balance of meat and wine. Meat and wine should either play a single party in unison, or as mutually accentuate the taste of each other.

There is an anecdote well known among sommeliers: "Even primitive people knew that if you chase an animal, give it to white guilt, and if the animal is chasing you – give it to red wine!"

All lovers of wine and good dishes to serve with meat and red wine. Indeed, the vast majority of studies gastronomy red wine and meat are the best pair. Red wine enriched with tannins in production, which are contained in the skins of grapes. Tannins help to balance the taste of fat, contained in meat, and to obtain the maximum pleasure from the taste of food.

the advice from winery Colonist:

the more fatty the meat, the greater the required level of tannin in the wine. In order to ensure that tannic red wine really breaks down fats, and after a hearty meat dinner You will never have heaviness in the stomach due to the guilt, you can conduct following experiment: take two cups one with water, the second with red wine. Fill both cups for a few drops of olive oil. Leave on a windowsill for several days until, until the water and the wine to evaporate. In a glass of water at the bottom will remain a fatty oil. But the glass of wine oil will dissolve and will evaporate along with the wine. 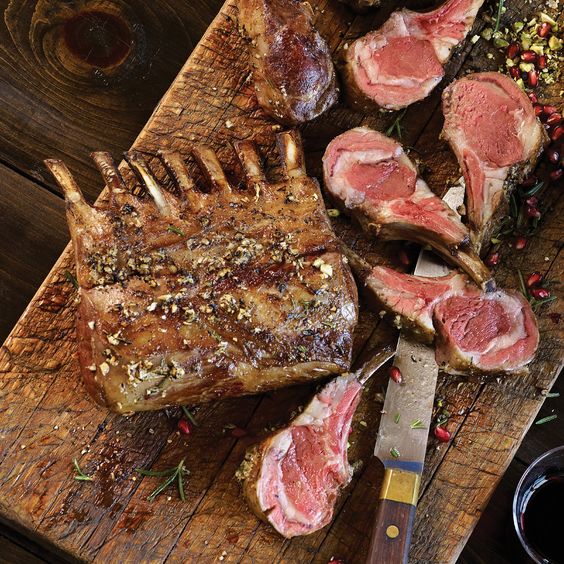 Red wine is the perfect partner to venison, lamb, rich and spicy dishes of meat. Such dishes would suit such “heavyweights” as Shiraz or Carmenere. The game has a very strong, sharp and specific notes, which can perfectly complement and highlight Italian red wine Chianti, which add aromas of cherry and wild berries and would be a kind of berry sauce.

Redi Ukrainian Kolonist wines to the game will certainly fit dry red wine made from 100% Ukrainian varieties – Odessa black. Black called it thanks to the saturated dark ruby color, which is obtained due to the fact that the berries have Odessa black painted not only the skin, but the flesh. That is why this grape variety is impossible to make white wine. Odessa black peel contains a huge amount of tannins, which due to its aging 100-year-old French oak, silky and noble. This wine has an unsurpassed aroma of prunes, black and red berries, vanilla oak and plenty of peppery notes, which will enrich the game dish and leave a long aftertaste.

Wine with delicate dishes of meat

If you are going to cook dishes with a delicate flavor in the style of Provence, or with delicate creamy sauces, you should choose the similar temperament delicate and structured wine. Can you recommend a Cabernet Sauvignon or even white wine Merlot with a “straw” shade, which is cooked in the Italian region of Ticino. It was the Italians and the Swiss invented to make white wine from red grapes of Merlot. 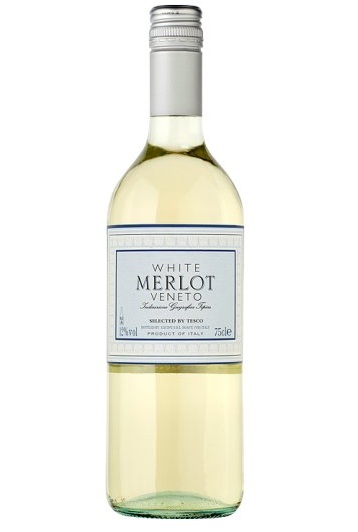 Steak is one of the most expensive meat product, the meat to take them from parts of beef carcasses that were not involved in the formation of muscle tissue. Meat cut into portions slices (three to five centimeters). There is a specific cut of beef for steaks to ensure that the heat is optimally passed through the fibers of the steak while it is cooking to the desired doneness. Cooking may be different from meat with blood until fully cooked. There are three most common degrees of doneness: Medium Rare, Medium and Medium Well. 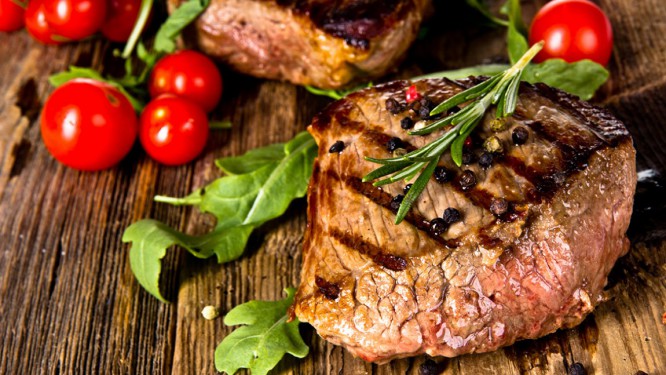 beef is one of the most recognizable in the world of meats. The texture of the meat when cut like marble with veins. Kobe beef prized by gourmets for its juiciness and tenderness, which is achieved due to the large number of small layers of fat. Steak of marbled beef are ribeye, T-bone and Striploin.

the steaks from the marble beef to offer a bright and fresh wine with expressive tannin and spicy finish - does it mean super Tuscans, Tempranillo, Cabernet, Malbec and Cabernet Sauvignon, Bordeaux alive (15 years). Among Ukrainian wine a great pair with steaks of marbled beef will be the assemblage of the Cabernet Merlon the category of "High gamma" TM "Kolonist" wine, which is made by a unique technology of fermentation of whole berries. This wine has good tannins, rich aroma of coffee and chocolate. When the wine breathe and open, in the nose will prevail confiture complex notes.

Wine to the steaks, Filet Mignon and Chateaubriand

Steaks Filet Mignon and Chateaubriand are the most gentle and virtually devoid of fatty tissue. We recommend you choose a wine that is not overly harsh with tannins but quite soft.

steak Filet Mignon and Chateaubriand to serve Bordeaux (aged 15 years), PinoNoir, Californian Zinfandel. Red dry varietal wine Colonist Cabernet and Merlot aged in 100 year old oak, well accentuate the taste of these steaks will not be to dominate and suppress the taste of meat, and are correctly combined.

lamb Meat is very tender. Lamb is called meat of sheep or sheep from three to twelve months. We recommend you to lamb quite structured wines (in the lamb is, the proportion of fat), but they should not be overly saturated so as not to set off the taste of the dish. A great combination for lamb will be Pinot Noir from Burgundy and New Zealand, will be interesting combination with wine Pinotage from South Africa. 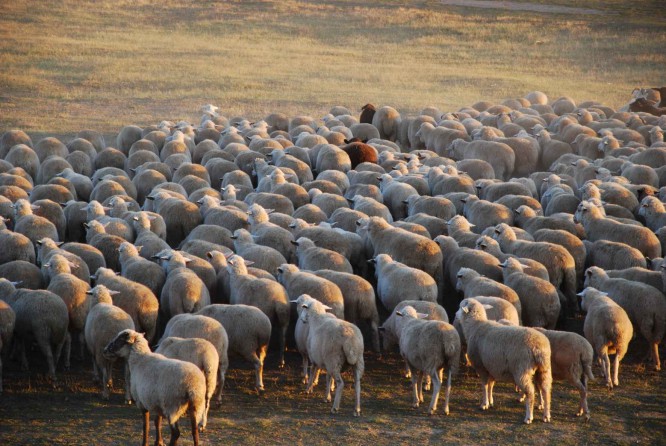 a Flock of sheep, Danubian Bessarabia[/caption]

For the Colonists, the meat of a young lamb is of particular importance. The Danube in Bessarabia, where he founded the winery Kolonist, ethnic Bulgarians are colonists more than a century in a row engaged in sheep. Bred old breed of sheep, which were able to maintain their purity because the shepherds have followed very closely to the breed of sheep did not mix. Sheep eat grass, which grows in salt marshes. That is why the meat tastes like it has a specific flavor, characteristic of some types of lamb, and is considered a dietary. Dishes of mutton and lamb is dominated by the traditional Bessarabian cuisine. Meat, as a rule, long simmering in their own juice. It is to the dishes of lamb Colonist recommends feeding a unique wine Liturgical. It is made on the basis of the Odessa black and a blend of European varieties. It blends with European varieties makes Odessa black softer and like nothing better suited to the lamb. Liturgical wine named due to the fact that it is prefer to drink on holidays and celebrations. For example, Easter, Christmas, wedding or baptism, and St. George's day – a big holiday in the Balkans, which is celebrated annually on may 6. On this day in Bessarabia serves a sacrificial lamb, which is slaughtered right before cooking, and Liturgical wine from the Colonist, which symbolizes the tribute given to St. George on this day.